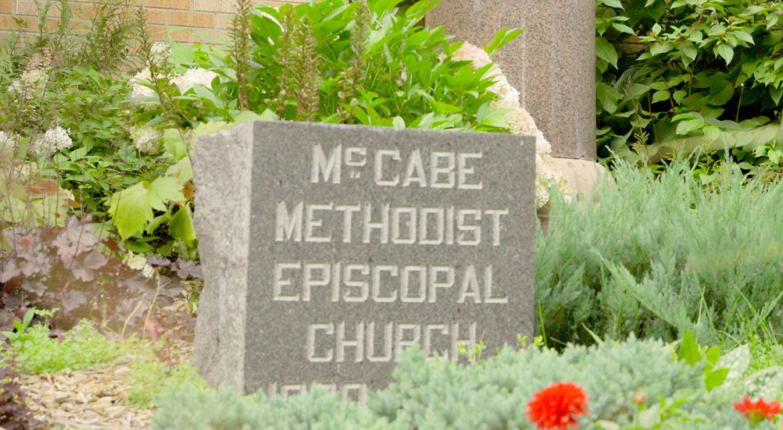 In 1879, First Methodist Episcopal Church of Bismarck was incorporated in Dakota Territory. The Rev. James W. Bull conducted services on the 2nd floor of the fire hall, at a site on 4th St., and in saloons. He collected funds in Dakota, Minnesota, & Wisconsin to purchase lots at 5th &Thayer and erected the first church & parsonage.

Our church is named after Bishop Charles C. McCabe: a Union Chaplain in the Civil War, a prisoner of war in Virginia, and the Chancellor of American University. He is noted for his work in Church Extension, because he went to great lengths to help the Methodist movement spread across our nation. When a speaker at the Freethinker’s Convention questioned the strength of the Church in the late 1800’s Bishop McCabe responded: “We’re building two (churches) a day.”

Our church tradition says that Mrs. Emmons donated a bell from “The Red Cloud” steamboat wrecked near Bismarck. This bell is still rung at the end of our worship services.

On August 20, 1906 the women of the congregation broke ground for a second building. The old parsonage was sold & removed; the new church was constructed on the north side of the lots. Bishop David H. Moore laid the cornerstone; granite from Aberdeen, Scotland.

The present McCabe building, on the corner of N. 6th Street and E. Boulevard, opened on April 5, 1959. Windows from the old church were incorporated into the new building along with new stained glass in the front of the Sanctuary. Late in the 70’s, the east and west stained glass windows were installed as memorials.

McCabe church continues to build as our community grows. In 2005 we opened our new addition which includes music rooms, youth area, fellowship hall and offices.

Our next major building project is a remodel of our Education Wing: we want to recreate a space that’s beautiful and functional for the children of today and tomorrow!

Nursery is available for all services